Our Stratum Reveal laser body contouring treatment is an alternative to the Coolsculpt fat freezing approach.

Prices start from £100.00 per treatment area per cycle, treatment plans consist of three cycles one month apart, after each session we will take your body measurements to track progress, you will also benefit from expert advice on lifestyle and diet to maximise the effectiveness of the treatment.

We recommend this treatment for those people who are looking to remove those stubborn areas of fat that won’t budge despite efforts with diet and exercise.

How does the Stratum Reveal Work?

The Stratum Reveal has 4 independently controlled applicators and each one has a cooled 80mm x 40mm sapphire window and a relatively low energy 1060nm infrared laser.  The applicators are attached to the area or areas to be treated and once attached the treatment cycle begins.

The initial sensation will be that the applicators are starting to feel colder and the cooling system starts to cool the skin surface.  Then after around 30 seconds the lasers with switch on.  These are relatively low power constant wave lasers the will shine onto the treatment area and the infrared light will penetrate  to around 2.5 to 3cm and the treatment area will start to feel less cold.  The cooling stays constant throughout the treatment cycle but the lasers switch on for a few seconds then off for a few seconds.  At the start of the cycle the laser one/off ratio is adjusted to steadily head the treatment area until the therapeutic treatment temperature of 42C is reached.  This is the skin temperature and is consistent with the temperature normally used for radio frequency (RF) skin tightening and like RF it will produce a short term 1 – 2 week tightening of the skin as a by product of the treatment.

However, deeper into the insulated fat layer higher temperatures are reached which causes the fat cells to breakdown and release the lipids they contain.  The fat cell material is then removed by the body and the lipids are either used for energy or redistributed.  Ideally the patient is also losing weight at the same time through control of their food intake and the released fat will be used preferentially.  If not,  typically 23% of the fat cells in the treated area will have been broken down and the fat will will be reabsorbed in other nontreated areas to enhance the body contours.

The complete treatment cycle takes typically 25 minutes and now massaging of the treated area is necessary.

What is involved in the Stratum Reveal Laser Body Contouring Treatment?

The Stratum Reveal treatment is generally well tolerated  and completely safe.  We will measure your body composition on our InBody machine at the start of each appointment, to gain a clear understanding of how well the treatment is progressing.  Then the applicators will be attached to the areas to be treated and the machine cycle started.  The treatment is generally well tolerated a the patient has full control over the intensity of the treatment and is able to ensure it remains within their acceptable comfort zone throughout.  The machine cycle is usually 25 minutes and after the applicators are removed and that is the end of that treatment.

The treated area will feel softer than normal and may be a little tender when pressed but this sensation will fade in a day or two and the treated area will firm up over the following weeks as the released lipids are removed.  We normally recommend a course of three treatments. 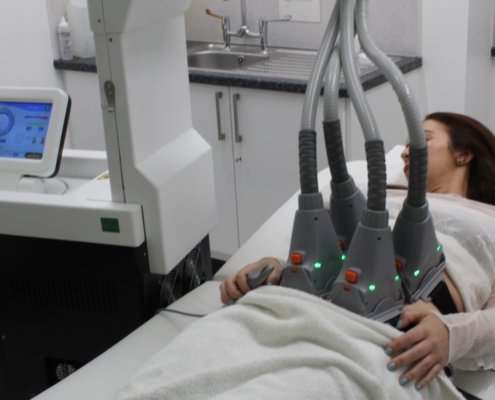 How much does the Stratum Reveal Laser Body Contouring Treatment Cost?