Our 300 picosecond laser is cutting edge for removal of unwanted Tattoos, and pigmentation

Picosecond lasers are a major step forward in the removal of tattoos of all colours and pigmented lesions  and bring major benefits including:

Our machine the Stratum pico 300 is a leading specification machine even among picosecond lasers and 300 picoseconds is close to the optimum specification for the ultimate in tattoo removal.  There is no doubt that fast picosecond lasers provide substantial benefits over older generation lasers but they are much more expensive to purchase.  ( i.e. Over £200,000 when first introduced) , which is why they are still rare.

However, as a leading aesthetics clinic Cosmex is committed to giving the best possible treatments to our patients, which is why we invested in the Stratum pico 300.  Unfortunately some other organisations who have not made the commitment to upgrade to a picosecond laser are engaged in a campaign of misinformation.  Therefore if you would like to have a more detailed understanding of why the Stratum pico 300 is vastly superior to most of the machines currently in use, please click on the button below.

The truth about picosecond lasers

How does Laser Tattoo Removal Work?

To remove a tattoo or pigmented lesion we shine a very bright laser light onto the tattoo.  The colour of the light is chosen to be one that is highly absorbed by the tattoo and not so much by the surrounding tissue.  Light is a form of energy and when it hits the tattoo it heats it.  The key to effective tattoo removal is to heat the illuminated side of the tattoo particles so fast while the dark side is kept cool by the skin, that the particles become stressed and crack.  Similar to pouring boiling water into a glass jar.

Once the particles are small enough the body’s immune system will engulf them and remove them from the skin via the lymphatic system.  However, this is a very simplistic description and there are vast differences between both tattoos and the machines to remove them.  If the tattoo is a shallow black tattoo then most machines will do an OK job but for larger tattoos, deeper tattoos and especially colour tattoos a fast and powerful picosecond laser has significant advantages and in many cases is the only type of laser that can complete the job.  Picosecond lasers also have the tremendous advantage in that when used correctly, do far less harm to the skin.  This is because although vastly more powerful they actually deposit far less heat into the skin.  For a more detailed understanding please view the adjacent video then click on the button below. 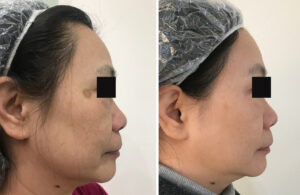 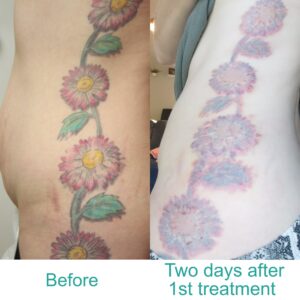 Laser Tattoo Removal is considered by Surgeons and Dermatologists to be one of the safest treatments.

The number of treatments required is unlikely to be less than 6 and could be more. However, tattoos have a number of variables including location, ink type, depth and colour which means that in most cases we will only be able to establish an accurate timeframe after the third treatment. Typically, amateur tattoos are the easiest to remove.

With our Pico 300 Laser we are able to remove Black, Blue, Green, Yellow, Red and pretty much any colour under the rainbow. However, there are some colours which are easier to remove, these tend to be the darker colours such as black. White tattoos can be removed however the white ink can oxidize which turns them black which makes the treatment time slightly longer.

All Tattoos are 3 dimensional and as the more superficial layers are removed the energy delivered will need to be increased to have a therapeutic effect on the deeper parts of the tattoo. Consequently, the rate of fading tends to reduce as the tattoo fades.

The Pico 300 Laser Tattoo Removal treatments are normally well tolerated and the process is considered to be no more painful than the original tattoo. After the treatment, we will sooth and cover the treated area. The covering can generally be removed after 24 hours but factor 50 SPF cream should be applied as a routine reaction for the following two weeks and ideally throughout the course of treatment.

The Treatment of Melasma and other pigmented lesions

The Pico 300 Laser with the 1064nm wavelength being used has the ability to reach down into the dermis, which makes this a fantastic treatment option for pigmented lesions.

However, when treating melasma it has a habit of returning! So topical medical-grade products supplied by the clinic are recommended alongside the Laser Pigmentation Removal treatment, this ensure you see the results you are looking for and helps to prevent future pigmentation.

We expose the pigmented area to very short pulses of highly concentrated light, which breaks down the melanin that is responsible for pigmentation in the skin. Melanin is effectively absorbed by the body, reducing the visibility of dark patches of skin. Most patients only need a course of 3-6 treatment sessions, at intervals of 3 to 6 weeks. However, the number of sessions needed can vary depending on correct aftercare.

After a full consultation you will be advised regarding number of sessions required. Below is a guide to our pricing:

What is the advantage of a pico second laser

Please view the video above to get a better understanding of what a tattoo is and how it remains visible in the body.

When removing a tattoo we are causing the tattoo particles to heat very quickly on the side of the particle exposed to the laser which causes stress inside the particle resulting in it being fractured.  The faster we can heat the particles the more effective the treatment is.  Pico second lasers heat far more quickly than other older types of laser and therefore work more effectively.

They also have the benefit of producing a much stronger photoacoustic effect.  The benefit of this is better clearance of all colours.   Less energy is deposited into the skin and the risk of long term damage to the skin is far less than with older slower machines.

Typically you will also need fewer treatments but the main benefits are more complete clearance and the lack of damage to the skin.

The general consensus is that the discomfort is similar to getting the tattoo in the first place.  Although we do seek to minimise the discomfort through the use of skin cooling.

How many treatments will I need

The number of treatments needed depends upon a number of factors:

a) A shallow amateur India ink tattoo can be removed in three treatments, a deeper more professional black tattoo will typically take around 5 treatments.

b) Inks used in tattoos are not regulated and some have a plastic component which is difficult to remove.

c) As a general rule the further from the heart the tattoo is the harder it is to remove.

d) What is you end goal?  Complete removal or fading so that the area can be tattooed again.

e) Very large tattoos may be better treated as two or more parts for your comfort and safety.

How long between treatments

The treatments shatter the ink particles but the body then has to remove them via the lymphatic system.  This process takes 6-8 weeks and we generally recommend at least 6 weeks between treatments, unless a larger tattoo or multiple tattoos are being removed, in which case the different areas can be treated at different times.

The limiting factor is the shattered ink particles when still present form a shadow over the particles below.  This is also the reason why more than one treatment is needed.